Introduction of Campylobacter and what food is found in 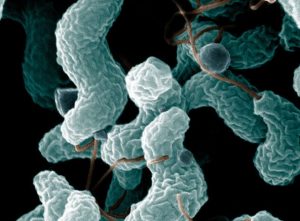 From a recent report of the USA’s Centre for Disease Control (CDC) we learn that for the first time in 20 years, Campylobacter has taken the #1 position from Salmonella for causing food borne illnesses in the USA. Campylobacter is surpassing Salmonella now in a large part of the world. Also in the EU, Campylobacteriosis has been the most commonly reported foodborne disease since 2005, a partial explanation for this is the fact that improvements have been made in the surveillance system and/or diagnostics for Campylobacteriosis in recent years. In food, Campylobacter was mostly found in chicken meat and raw milk products.

One of the underlying factors of Campylobacter taking over the #1 position from Salmonella both in the USA and in the EU has been the successful Salmonella control programs put in place for poultry by EU Member States and the European Commission since 2008. The number of reported Salmonella outbreaks within the EU has decreased by 44% since 2008. The same results are now showing in the USA because of vaccinations of chicken flocks and tighter regulations. 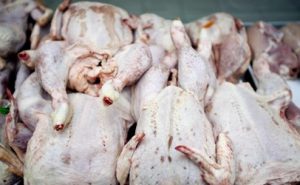 Campylobacter species are widely distributed in most warm-blooded animals. They are prevalent in food animals such as poultry, cattle, pigs, sheep and ostriches; and in pets, including cats and dogs. The bacteria have also been found in shellfish.

The main route of transmission is generally believed to be foodborne, via undercooked meat and meat products, as well as raw or contaminated milk. Contaminated water or ice is also a source of infection. A proportion of cases occur following contact with contaminated water during recreational activities.

Campylobacteriosis is a zoonosis, a disease transmitted to humans from animals or animal products. Most often, carcasses or meat are contaminated by Campylobacter from faeces during slaughtering. In animals, Campylobacter seldom causes disease.

The relative contribution of each of the above sources to the overall burden of disease is unclear but consumption of undercooked contaminated poultry is believed to be a major contributor. Since common-source outbreaks account for a rather small proportion of cases, the vast majority of reports refer to sporadic cases, with no easily discernible pattern. 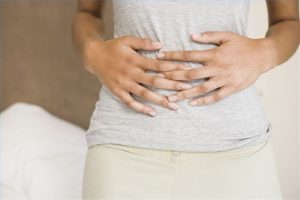 The onset of disease symptoms usually occurs 2 to 5 days after infection with the bacteria, but can range from 1 to 10 days.

Death from Campylobacteriosis is rare and is usually confined to very young children or elderly patients, or to those already suffering from another serious disease such as AIDS.

Complications such as Bacteraemia (presence of bacteria in the blood), hepatitis, pancreatitis (infections of liver and pancreas, respectively), and miscarriage have been reported with various degrees of frequency. Post-infection complications may include reactive arthritis (painful inflammation of the joints which can last for several months) and neurological disorders such as Guillain-Barré syndrome, a polio-like form of paralysis that can result in respiratory and severe neurological dysfunction in a small number of cases.

Treatment is not generally required, except electrolyte replacement and rehydration. Antimicrobial treatment is recommended in invasive cases (when bacteria invade the intestinal cells and damage the tissues) or to eliminate the carrier state (the condition of people who harbor Campylobacter in their bodies and keep shedding the bacteria while remaining asymptomatic).

Prevention of Campylobacter what food is found in 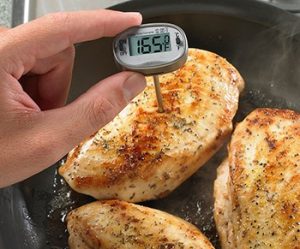 There are a number of strategies that can be used to prevent disease from Campylobacter:

Prevention is based on control measures at all stages of the food chain, from agricultural production on a farm, to processing, manufacturing and preparation of foods both commercially and domestically. In countries without adequate sewage disposal systems, faeces and articles soiled with faeces may need to be disinfected before disposal.

Measures to reduce the prevalence of Campylobacter in poultry include enhanced biosecurity to avoid transmission of Campylobacter from the environment to the flock of birds on the farm. This control option is feasible only where birds are kept in closed housing conditions.

Good hygienic slaughtering practices reduce the contamination of carcasses by faeces, but will not guarantee the absence of Campylobacter from meat and meat products. Training in hygienic food handling for abattoir workers and raw meat producers is essential to keep contamination to a minimum.

Prevention methods against infection in domestic kitchens are similar to those used against other foodborne bacterial diseases. Bactericidal treatment, such as heating (for example, cooking or pasteurization) or irradiation, is the only effective method of eliminating Campylobacter from contaminated foods.

Estimating the importance of all known sources is therefore extremely difficult. In addition, the wide occurrence of Campylobacter also hinders the development of control strategies throughout the food chain. However, in countries where specific strategies have been put in place to reduce the prevalence of Campylobacter in live poultry, a similar reduction in human cases is observed. 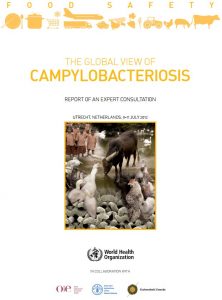 In 2012 the World Health Organization held an expert consultation leading to an elaborate report on Campylobacteriosis. The recommendations from the report are the following:

support countries in the implementation of the Codex guidelines for the control of Campylobacter and Salmonella in chicken meat.

Support CODEX in the development of any further international guidance or recommendations that are needed to support reduced human exposure to Campylobacter via foods traded internationally.

Facilitate wider accessibility to existing systematic reviews of interventions and control measures and facilitate new work in this area as needed including the provision of further guidance and data to support the application of the FAO/WHO Web-based Risk Management Tool for the control of Campylobacter and Salmonella in chicken meat.

promote the use of information from observational studies to design and implement intervention studies, ideally randomized control trials as a means of addressing some of the data gaps on the efficacy of interventions in practical settings.

provide guidance and support on improving slaughter and processing hygiene to reduce the level of contamination of end products from infected flocks.

On a global level more emphasis needs to be given in the entire food chain to reduce the number of cases of Campylobacteriosis. This can only be done successfully if all part of the entire food chain take their responsibility and implement the current known best practices as detailed in the WHO report and tools. Special care needs to be taken in food products for weaker groups like infants, elderly and immuno-compromised people.

5 Secrets To Prevent Salmonella from Ending up in Your Product